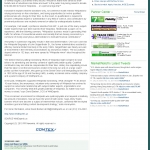 Wikipedia Experts Call for No Donations to Wikipedia

NEW YORK, Dec. 15, 2010. Large images of Wikipedia co-founder Jimmy Wales have for weeks dominated each and every page on Wikipedia, accompanied by a request for donations. Seen by 400 million unique visitors monthly, Mr. Wales is arguably the single most visible individual on the planet, surpassing even top celebrities, politicians and religious leaders.

While unquestionably effective for promoting Mr. Wales, is this strategy best for Wikipedia? Alex Konanykhin, founder of WikiExperts.us, believes that advertising revenues could provide incomparably better financing of Wikipedia, without affecting its neutrality. WikiExperts knows about Wikipedia's business potential first-hand, as it is inundated with business requests for Wikipedia profiles.

"Would we have a more easily searchable Internet if, instead of relying on $23 billion of annual revenues, Google adorned every search page with its founders' pictures and their personal appeal to donate?" asks Konanykhin. "The banner with Mr. Wales' image is viewed roughly 3,000 times every second. Wouldn't it make more sense to show tasteful ads of advertisers like Rolex and Audi? Is the public truly being asked to donate $16,000,000 to finance Wikipedia ... or a personal ego trip?"

Konanykhin explains that the donations-only, no-commerce model restricts Wikipedia to relying exclusively on free volunteers, and losing opportunities to involve qualified professionals who charge for their time. As the result, no qualification is required to become a Wikipedia expert or administrator in any field of science, and contributions by prominent professors are routinely removed or edited by undergraduate students.

For example, Carl Hewitt, a professor emeritus from MIT, is just one of the many subject-matter experts that have been banned from Wikipedia. Hewitt wrote a paper on his experience, with the following summary: "Wikipedia's business model is generating Web traffic for articles of conventional wisdom and morality that are heavily censored by a commune of mostly anonymous Administrators to motivate financial contributions."

Anonymity in submission regularly results in libel and disinformation. One such case was the Wikipedia Biography of John Seigenthaler Sr., the former administrative assistant to Attorney General Robert Kennedy in the early 1960s. Seigenthaler was falsely accused of involvement in the Kennedy assassinations by anonymous editors. The accusations stayed online for 132 days, and were spread to "Wikipedia mirror" sites throughout the Internet.

"We believe that boycotting fundraising efforts of Wikipedia might compel it to raise billions via advertising and develop content of significantly better quality. Qualified contributors may and shall be compensated for their time. History has repeatedly proven that free labor is not the best business model in the long run and on a large scale," points out Alex Konanykhin, who grew up in the Soviet Union until immigrating to the USA in 1992 at the age of 25 and founding KMGi, a widely acclaimed online visibility company and a parent company of WikiExperts.us.

In the past, WikiExperts supported Wikipedia fundraising. What changed? "In its almost 10-year history, the anonymous, volunteer-only community of Wikipedia has evolved to support an adversarial relationship with subject-matter experts, organizations and companies. This severely limits the growth potential of Wikipedia, no matter how much money is raised," says David Barberi, COO of WikiExperts.

"The no-banners environment on Wikipedia was quite enjoyable and required a relatively low amount of donations. Now we have the worst of both words: huge Jimmy Wales banners which have become a subject of Internet-wide ridicule, combined with the tripled donations goal and failing content development strategy," adds Konanykhin.

© 2011-2021 WikiExperts, All rights reserved.
Wikipedia is a registered trademark of Wikimedia Foundation which is not affiliated with WikiExperts.